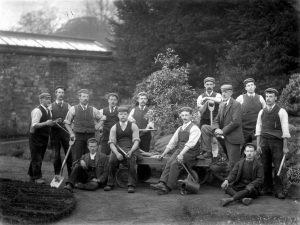 During the Victorian period the site was part of the kitchen garden, which grew much of the produce for Englefield House.

During the First World War however, like many walled gardens, the site fell into neglect as the gardeners went off to fight, many of them never to return.

During the 1960s most of the old ranges of Victorian glasshouses had come to the end of their useful life and were replaced with the aluminium glasshouses that the garden centre is based in today.

In the early days the enterprise was run by the estate, before being leased to Mr William Partridge (Bill), who had been head gardener at Englefield for many years. He ran Englefield Garden Centre very successfully until he retired in 1995. Since 1995 onwards it has been managed by the Affinity Trust.